This is a story of a family who lived in the Arkansas wilderness in the 1850s. The father and son break up an Osage Indian attack on a helpless Wichita Tribe while the men are out hunting buffalo. Because the two white men stopped the attack, the Osage warriors retaliate and take revenge by attacking the settlers cabin, and the mother is killed. The father and his two children escape, and run for their lives as the Osage Warriors are in pursuit.

This book is clean and wholesome without foul language or sexual innuendos. It is LDS and family oriented reading. Any age can read this book and enjoy its contents.

My youngest reader is a boy 9 years old, and my oldest is a woman who is 103 years old. When you finish reading you will, want to have a better relationship with your family, neighbors and friends. Have a great read.

The father is John Morgan with his son Caleb, and beautiful daughter Samantha.

As Caleb started to mount, he heard the thundering of horse hoofs behind him. Turning, he saw the other Indian with his bow in hand and the arrow aimed directly at him. The warrior had a menacing grin of satisfaction, as he pointed the arrow directly at Calebs chest.

Now both of you just smile real nice and talk to them, and Samantha, let them know that you are their queen. Again, John reiterated, Samantha, these mountain men respect a woman, and if they know you are married, they will respect you and your husband. But if they find out you arent married, there are some men here who would kill Caleb and I, and take you for themselves. Samantha whispered, Dont worry Pa, well try real hard to make it convincing.

The word was out, There was going to be a wrestling match! and soon both whites and Indians were running to see the match. Within fifteen minutes, there were well over two hundred men gathered in a half circle. They gawked at the giant of a man. He had taken off his shirt and was flexing his rippling muscles. Everyone was watching to see if the young boy would get killed. They were yelling it was a match between David and Goliath.

Caleb walked over and pointed to the wagon box, and said This box is deeper than the other wagon boxes. He said, I wonder. Then he walked over to another wagon and found an ax, then came back to the first wagon and commenced to chop at the box. Soon the bottom gave way, and Caleb reached in. He pulled out a locked carved wooden box. There was no key, so he took his knife blade to pry open the box. As it gave way he found three leather pouches, one was quite large.

Caleb handed Samantha the heaviest pouch and asked her to open it. She did so and was surprised to see it was filled with gold coins. The second smaller pouch contained numerous sparkling stones in an assortment of colors. The third pouch contained womens jewelry and a mans pocket watch. He searched the wagon for some identification, but could find nothing. He took the three pouches and put them in his saddle bag, and put the ax in one of the mule packs.

Caleb looked around at the dead and said, We dont dare bury any of these folks because if the Indians come back, theyll know that weve been here. Lets get out of here while weve still got our hair! 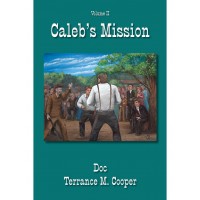 Caleb and Sam were married by Brigham Young and they now had a son and were living at their ranch. B..